View topic - Yet another foodscare :-(

It's a bit late, but this one passed me by last week.

It seems that the childihood joy of licking the bowl after mum has made a batch of cakes is now off limits, as the raw flour may be toxic, replacing the raw eggs which were recently reprieved as the guilty party in deaths from cakebowl licking.

How interesting about the flour. I was wondering at first, how on earth flour could be contaminated with E Coli, but after reading the article I can understand why.
Thanks for the link Sakkarin.
Top

In 2016, dozens of people across the US were made sick by a strain of bacteria called Shiga toxin-producing E. coli O121, that was linked to flour.

interesting that america wants to protect it's population from 'uncooked cake mix sickness' but not from being killed by guns.
i think i'll keep licking the bowl and avoiding firearms.
Top

Renée wrote:How interesting about the flour. I was wondering at first, how on earth flour could be contaminated with E Coli, but after reading the article I can understand why.
Thanks for the link Sakkarin.

I wondered that when some carrots and tomatoes were culprits and that was thought to be manure too. That was a good couple of years ago, so it makes me wonder how that knowledge hadn't reached the particular flour producer in the US.

Mind you, we didn't have those flexible rubber/silicon spatulas at one time and not many home cooks leave more in the bowl than they take out as TV cooks do

Whisks on the other hand...
Top

scullion wrote:interesting that america wants to protect it's population from 'uncooked cake mix sickness' but not from being killed by guns.
i think i'll keep licking the bowl and avoiding firearms.

There are now so many guns floating about that I can't see new rules making much difference TBH. I suspect guns in some states are seen more as a way of refusing to be ruled by Washington than anything to do with guns themselves, i.e. not having rights taken away.
----

The doner kebab thing (some MEPs trying to get them banned) seems to have failed. One commentator on TV said that phosphates were more prevalent in pre-made frozen ones widely used in Germany but weren't used in freshly made ones. Makes you wonder if nationalism underlies it, kebabs being food of a different culture and religion since no mention of banning cured sausages etc. Maybe they were playing Tiddlywinks to see what they could get into the pot, or the other metaphor of chucking spaghetti at the ceiling to see what would stick, i.e. what next?

Yours,
Cynical of Tunbridge Wells
Top

Good news this time:
Naked bacon, being without nitrites, was announced this week:
https://www.belfasttelegraph.co.uk/news ... 42934.html

In a supermarket near you from Jan 10. If anyone buys some, it'd be interesting to hear what it's like.

IIRC nitrites help preserve bacon, including shelf life, so might need to check the use-by date in case shorter for naked.
Top

That sounds like rubbish to me
Surely pork contains allergens? And what anout the "Mediterranean fruits and spice extracts" - they could be allergenic

jeral wrote:There are now so many guns floating about that I can't see new rules making much difference TBH. I suspect guns in some states are seen more as a way of refusing to be ruled by Washington than anything to do with guns themselves, i.e. not having rights taken away.

I think it's Washington that doesn't want to ban guns just as much as the individual states.
Top

What the hell is this?? Growing up when mum made cookies, including chocolate chip cookies, we would nibble from the bowl, raw eggs and all. I think the bro and I ate more cookie dough than got baked. I don't remember anyone ever getting sick.....same with cake batter.

We have similar stuff here in the states

The flying Spud squad will be around next Christmas, just in time for roasties. Next they will be telling us semolina is not good.

All I know is that I am going to enjoy life.
Top

Stokey Sue wrote:...[clip]...
...and a company that is doesn't think pork can be allergenic

I didn't know pork could have allergens, assuming not wormy or contaminated in some way, and assuming you don't mean hormones or antibiotics in the feed. What allergens as I'm drawing a complete blank? Ta very much.

Wouldn't the bacon makers have to list any known iffy fruit or spice in the allergens bold print if of an amount above the accepted tolerance threshold?
Top

Pampy wrote:I think it's Washington that doesn't want to ban guns just as much as the individual states.

I take your point, but I suppose it depends which party holds the balance of power in the Senate (mid-term election due in Nov 2018). Generally, the idea is that only good, responsible people own guns for protection (2nd Amendment), so curtail (Democrats) not ban as not possible anyway without changing or scrapping 2nd Amendment. I suppose it is at least vaguely compatible with their external arms trade sales of guns.

The UK stance conversely is quite hypocritical. We Joe Public don't want guns (NIMBY) but turn a blind eye to the UK being the second biggest arms dealer in the world (last time I checked). I suppose it's a metaphor for saying that someone else can lick the dodgy bowls.

Mind you, when we licked bowls, we knew (or thought we knew) what was in there - i.e. no hair-spring triggers like salmonella, or whatever the latest scare is.
Top

jeral wrote:I didn't know pork could have allergens, assuming not wormy or contaminated in some way, and assuming you don't mean hormones or antibiotics in the feed. What allergens as I'm drawing a complete blank? Ta very much.

Almost anything can be an allergen, especially proteins. Allergy is an individual reaction to something, and meats can cause allergy like any other food. It simply is not possible to draw up a list of all allergens, because pretty much everything is an allergen to someone

Having said which, people (usefully) compile databases of identified allergies, so if you have an allergic reaction to a meal, but you aren't sure which ingredient caused it, you can find out which is the most likely (affects most people) and start your investigation there

I think the confusion arises because some substances (peanuts, eggs, milk etc) are particularly common causes of severe, dangerous, allergy and so have to be identified on food packaging. There are lists of these "super" allergens. But they are not intended to be lists of all allergens, just those that have been identified as very high risk.

I see Butlins are in the list of affected companies, I was amused that there was a Butlins ad at the top of my page!

That Express article is strange though, it focusses on the gormless remarks of a Wetherspoons "diner", whereas I can find no link to the actual details of the Russell Hume story. 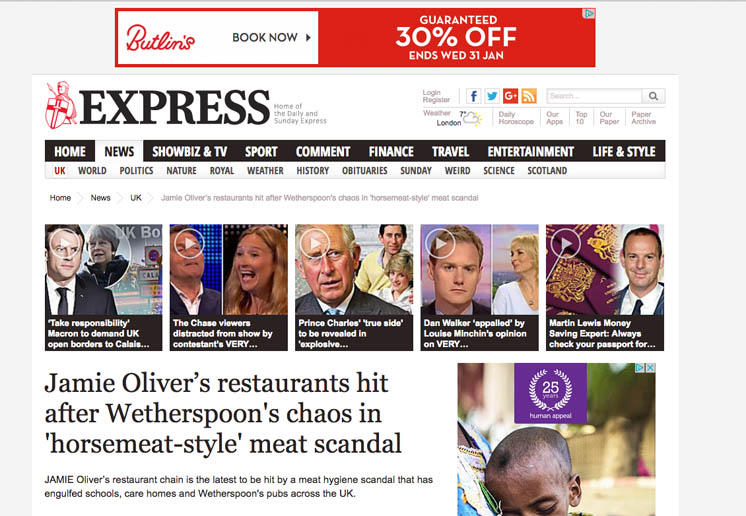 I read on BBC red button news that it was something to do with mislabelling. Doesn't make it true, though!
Top

The impression I'd gained from various links people tweeted was simple mislabelling, if you'd ordered, say, an Aberdeen Angus rump steak you'd probably have got a reasonable beef steak but not necessarily as specified. That could also be wrong and the fact that gammon steaks are also withdrawn makes one wonder...

The FSA does seem to be oddly quiet about the issue, presumably there a whistleblower somewhere at the root?
Top

Why do so many people these days have allergic reactions to various foods? Many years ago, I didn't know anyone who had problems.
Top

A lot of the oldies used to say 'I like onions but they don't like me' or 'Beans don't agree with me' etc. I think it is the modern equivalent of 'indigestion'. Very few are true 'allergies'. Also some attention seeking behaviour perhaps plus some real stuff such as eg coeliac disease which is a big concern and better diagnosed and better outcomes now.

I think there are a few things
One is terminology - I'm pretty sure for example I am truly allergic to tarragon, but fortunately I've never had a reaction strong enough to be definitivec (and I'm not wasting resources having tests) but as you say, a few years back I'd have just said it didn't agree with me

There's also better testing - the various lab tests that have only been around at all for maybe forty years, and have only been quick, easy, and affordable for much less than that

But it does seem that there's more allergy related illness such as asthma around, and I'm not sure we know why, from what I've read

And yes, there are those who claim to be allergic to anything they dislike, which is fashionable but they are usually quite easy to spot

According to the BBC the problem with the meat seems to be messing around with best by dates, to the point where the FSA think it is dangerous though Russell Hume deny this.
Top

Very difficult subject. I was very sceptical at one time until I suddenly became "allergic" to avocados no idea why but they made me very ill then it suddenly stopped. About 40 years ago (ouch) I was going out with someone who told me he was allergic to walnuts which I thought sounded like nonsense - until I saw the reaction when he had some in ice cream near Lake Garda. A couple of years later we were at a very posh tea party in The Witterings. Put my chops into a lovely looking egg mayo bridge roll, to find it contained walnuts, only in The Witterings (and no the Mars Bar Incident with Marianne Faithful didn't happen - someone at the tea party who had been there told me so). Looked up and saw D about to do the same and I screamed across the room "D, don't eat it - there are walnuts!" That sort of put a stop to the polite chit chat.
Top
Topic locked
380 posts • Page 15 of 19 • 1 ... 12, 13, 14, 15, 16, 17, 18, 19

Users browsing this forum: No registered users and 5 guests