Some years ago a boules competition was advertised in the village. The 4 prizes, in order were to be:

This Christmas past we were lucky to win two prizes from the Cave Co-op's tombola which they hold every year for charity. A case each of red rose and white wine and a voucher for the local butcher.
Top

I barely remember this but one Christmas my mother won a goose in a raffle and my Dad a turkey. Both huge. I think the goose (which Mum didn't like) got swapped for whisky and the turkey kept the neighbourhood in sandwiches for days - I think Roger the sheep dog did quite well too

As a student earning a bit by helping the college caterer I was once confronted with a perfectly cooked 27 lb turkey (cold fortunately) and told that as I was the bloomin' biologist I could carve it. I did

I had one of those 'You know you're a foodie when...' moments when Mr Strictly arrived home from work yesterday. The chef from his works canteen has an allotment so he and Mr Strictly get on very well, as the latter is a very keen gardener. Anyway, Mr Strictly came home with a standard sized carrier bag full of rhubarb that had grown on said chef's allotment. I gasped with delight in the same way that a girlier girl would if they'd been given a designer handbag or jewellery or whatever!

I cannot wait to use it.
Top

Rhubarb is one of my favourite foods and one of the most difficult to find here. We have tried growing it but it is just too hot and dry for it to survive the summer months.
Top

I can sympathise Joan. Last year Asda stopped selling fresh outdoor grown rhubarb for some reason. The forced version had been on sale but was so expensive we couldn't afford it as I was out of work at the time. We ended up buying the tinned variety which was OK but there was only so much you could do with it.
Top

What are good things to do with rhubarb, assuming one can get it? My memory is of a thin stripe in a pie with so much sugar added that I'd prefer any other fruit pie by preference.

I've always fancied a rhubarb fool though, or a trifle with orange Cointreau maybe? A proper recipe is probably the best way to go...
Top

I have some rhubarb gin macerating at the moment - should be ready this week, it's a lovely colour
Top

jeral wrote:What are good things to do with rhubarb, assuming one can get it? My memory is of a thin stripe in a pie with so much sugar added that I'd prefer any other fruit pie by preference.

I've always fancied a rhubarb fool though, or a trifle with orange Cointreau maybe? A proper recipe is probably the best way to go...

We are having a modified version of this pudding tonight, which I'll be serving cold in this heat! I've added raisins, reduced some of the sugar and omitted the cream and butter. I've also used cream cheese instead of ricotta.

Alternatively there is this selection. I can recommend the Rhubarb spice cake. Also any of the strawberry and rhubarb recipes featured below will be worth trying!

I hope you find something that floats your boat jeral!
Top

I like rhubarb with pork - we always had rhubarb with custard when I was young - the rhubarb was grown at the end of the garden & was a treat when it came up - although it always makes my teeth squeak - my grandmother would only eat forced rhubarb.

I did make a rhubarb cake a couple of years back which we liked - have no idea where the recipe is!
Top

Next door neighbour's cat borrowed my bike for the afternoon! Really sweet natured cat, so it's welcome, just so long as she doesn't take it out for a spin. 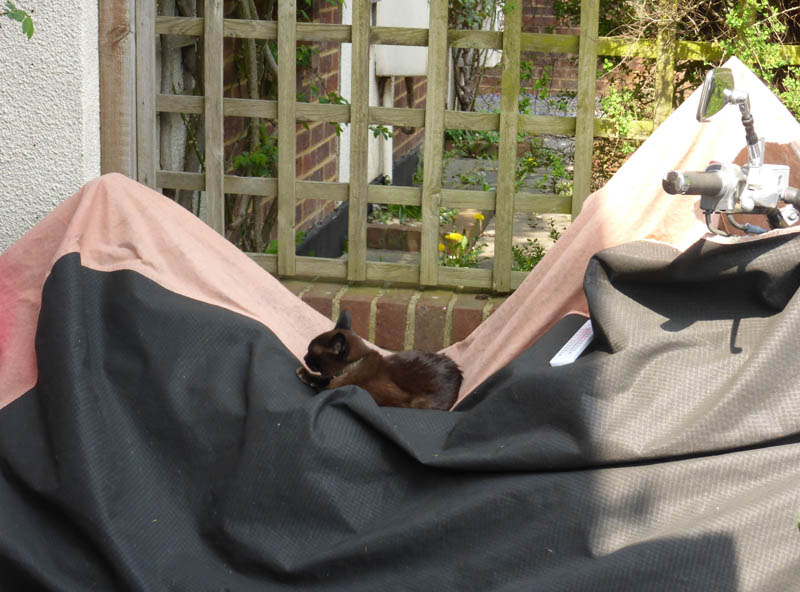 It's a painfully thin and tiny Burmese, don't know how the poor wee thing survives, as there are two vicious predatory toms opposite, that I've had to separate a couple of times when fighting, they carry on regardless like one of those Andy Capp scraps. There's piles of fur left in the road when they've finished.
Top

Sakkarin wrote:It's a painfully thin and tiny Burmese, don't know how the poor wee thing survives, as there are two vicious predatory toms opposite, that I've had to separate a couple of times when fighting, they carry on regardless like one of those Andy Capp scraps. There's piles of fur left in the road when they've finished.

Assuming she has been "done" she's of no interest as a a paramour and she's so far down the pecking order there's no need to knock her back into place. Her only interest for them is possibly as a nice warm pillow! I got my last little girl precisely so I could insert her safely into a neighbourhood of big bruisers, and it worked.
Top

neutered toms often fight, too, because they smell wrong to each other - so a vet once told me when a repair was needed.

i've made a very good rhubarb wine in the past and, this week, i pulled a few sticks, stewed them with some chopped up, crystalised ginger (and some of the sugar shaken off the rest of the jarful) and stirred it into greek yoghurt. it made a very nice pudding.
Top

Oh boy, do neutered toms fight! When I had my little family of 5, all from the same litter, one designated himself as the alpha male and he'd fight anything and everything, including the vet, who he had a 100% record of connecting with! Unless he was sedated or restrained, the vet always wore gauntlets. He absolutely hated a neutered tom who lived on the other side of the road and had many a scrap with him, resulting in numerous trips to the vet's to get him patched up. He twice had his tongue ripped in half and ended up with it looking like a snake's with a "v" at the tip! If I ever had anyone in the house, he would position himself between me and them and if he thought that they were approaching me, he'd first start growling, then it would develop into a war-cry and if that didn't stop them, he actually attack! What a character - I loved him and his siblings dearly.
Top

Sad to see the Masterchef semi-finalist died after collapsing whilst taking part in the London Marathon, age of 29

Bizarrely, Grace Dent in the Observer praised the food he served her on Masterchef yesterday in her column. One of those coincidences.
Top

One of the worst examples of no good deed going unpunished

Hopefully the BBC will show a compilation tribute for him.
Top

It was such shocking news, because he looked so fit and healthy. You just can't believe it. So sad.
Top

I've sponsored a chum who did the marathon.
But this is sad news.

I've been away the last couple of weekends. Wedding one trip in Nottingham.
And Tony had an investment conference this weekend, so we stayed at Matlock Bath - I wandered round an antique mill - awful weather, whilst he listened to his lectures.

Users browsing this forum: No registered users and 1 guest