Oh dear, your post made me up my game Renee, and I decided to extend my intended cycle ride to Morrisons, and aimed to try and cycle all the way to the Apsley Aldi, which is a 24 mile round trip, in sympathy with those poor marathon runners tomorrow. Apart from a handful of road crossings and a few hundred yards of main road in Apsley, it's all "off road", following an abandoned railway line that's been turned into a cycleway, and canal towpaths.

The scary thing is that it took me longer to cycle (around 2hrs 25 in all) than the elite runners will RUN the marathon, and an extra mile and a half at that! It was also sadly longer than Google says it should take, although there were many, many sunny day walkers, so I had to slow down countless times for families, as the towpath is only about a metre wide.

It's the furthest I've cycled in about 18 years, so every single muscle is aching and I feel like I could sleep for 24 hours.

I forgot about the butter, but got these goodies, French No 55 Bread Flour (last time I had to order it direct from a mill), Coffee beans for the equivalent of £1.99 for a 227g pack (£2.29 is the cheapest elsewhere), the aforementioned maple syrup, and a sweet little one-egg frying pan for £2, to save me using my expensive catering quality ones. 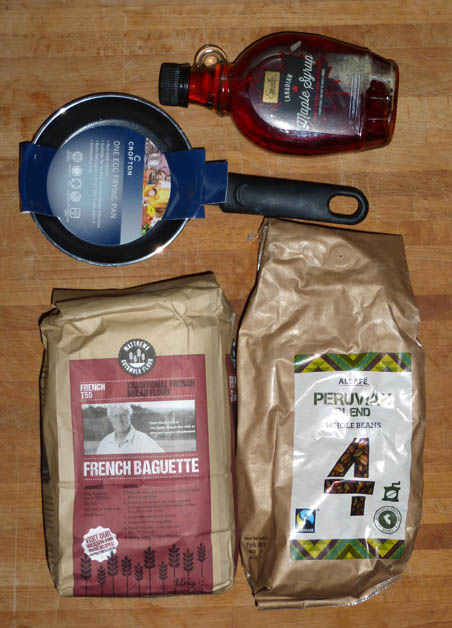 Renée wrote:Sakkarin, if you have an Aldi nearby, Norpak spreadable which contains 64% butter, 26% rapeseed oil, water and lactic cultures is gorgeous and only £1.89 normal price for 500g.

I've tried Aldi's butter but have to say I wasn't too keen - it didn't really taste of "real" butter to me and was quite bland.
Top

I am on my second Americano made with Aldi Italian roast beans, a great success

I tried the Lidl spread bacause some one said they couldn't tell the difference between Lidl and Lurpak but I could. Haven't tried the Aldi one but I tend to buy Country Life which seems almost permanently on offer and is for my taste possibly the best of the lot
Top

The Italian beans were relatively expensive, hence I went for the Peruvian ones. Normally I would go for a strength of 3, as I find 4 a bit strong, but I've had 2 cups today and they tasted great. However as my grinder is full of Tesco basic, I used my Hario Skerton hand grinder, which reviews reckon gives a better grind, for a weighed-out amount of beans. I've reduced the amount from 12 to 11g per cup in recent months.

Last time I went to an Aldi (smaller one in Hemel Hempstead), they didn't stock coffee beans, and I note that they don't list either of the beans we've mentioned on their website. Maybe it's something they only do at bigger stores.
Top

I bought Italian (4) and Colombian (5), both in the same range, both £1.99 iirc
To be honest I didn't find the 5 any stronger or more bitter than the 4 but the Italian has a much richer flavour which I prefer

Just thought I'd update you re the Aldi Maple Syrup we've both bought recently. Not sure if you've opened yours yet, but I have just done this with mine and tasted some. It is amazing, and the real McCoy. There is even a woodsy backnote to it, and probably the best maple syrup I've ever tasted. I've used some of ours in a bread and butter pudding type of thing.
Top

I thought that Aldi Norpak butter spread in the tub was similar to Lurpak, but maybe my sense of smell/taste isn't as good as yours Sue.
Top

Good news on that syrup, Strictly. I just worked out that at £2.99 for 250ml, it is 18p a tablespoonful however, so I'll be keeping it for special occasions! American pancakes are top of the list, and Pecan Pie is even topper.

I think I will be using our maple syrup for special occasions as well. I'll be making some pulled pork for the Royal Wedding Day for Mr Strictly and I, so will use some of it for the cooking liquor. I also want to make some cinnamon buns for our wedding anniversary, as it falls on American Independence Day. I will have to make a maple syrup icing for them, it would be rude not to! I always do an American themed meal for that occasion.
Top

If you’re not doing so already, I’d advise you to keep the opened maple syrup in the fridge. We always buy the one from Aldi, it is lovely, but it goes mouldy in the bottle if it is left in the cupboard
Top

smitch wrote:If you’re not doing so already, I’d advise you to keep the opened maple syrup in the fridge. We always buy the one from Aldi, it is lovely, but it goes mouldy in the bottle if it is left in the cupboard

I kept my last bottle about two years in the cupboard, it was fine.
I'd be worried that any syrup kept that cold would invert (set like honey does)?

My current bottle is not Aldi but I just checked and it's 65% sugar, I'm surprised mould could grow on that
Top

I have a question on that "inversion": does honey degrade too? It never tastes right after it's set if it started off as runny honey, even though I seem to remember reading that all you need to do is warm it to rejuvenate it.

Also my current tub of golden syrup (which I believe is invert sugar) has gone slightly granular, marginally darker, and does not taste quite right either, which is something I've not encountered before. Not much of it left fortunately.
Top

I know what you mean about the golden syrup, because it does go darker and doesn't taste the same as it ages. It's something that I rarely use these days though.
Top

Stokey Sue wrote:
My current bottle is not Aldi but I just checked and it's 65% sugar, I'm surprised mould could grow on that

I was surprised by the mould too but it happened with more than one bottle. Maybe it is just my kitchen? It has been fine in the fridge so far, I keep it in the door which isn't as cold.

I just googled and found this but I'm no scientist even though I worked in a biology related environment for over 6 years http://blog.mycology.cornell.edu/2007/03/20/the-fungus-in-my-maple-syrup/
Top

Golden Syrup...It's something that I rarely use these days though

I didn't for years, however I occasionally have porridge these days and use GS instead oif sugar, and also Reggae Reggae man's Jamaican Ginger Cake which I make when the fancy takes me every 3 months or so, uses it.

And treacle tarts of course, not that I've made one for many many years.
Top

smitch wrote:I was surprised by the mould too but it happened with more than one bottle. Maybe it is just my kitchen? It has been fine in the fridge so far, I keep it in the door which isn't as cold.

I just googled and found this but I'm no scientist even though I worked in a biology related environment for over 6 years http://blog.mycology.cornell.edu/2007/03/20/the-fungus-in-my-maple-syrup/

Great blog post - and answers the conundrum, 65% sugar not quite enough to make the water in the syrup useless to some extreme moulds it's tree sap after all, though quite concentrated, therefore not completely dry. So I've obviously never been unlucky enough to contaminate my maple syup with the wrong mould, though it must lurk in some kitchens

All the common culinary syrups (maple, golden, corn, runny honey) are basically mixtures of glucose and fructose with smaller amounts of other sugars mainly sucrose but tgere can be other thisngs in there)

Golden syrup is made by starting with sucrose solution and heating it or otherwise treating it(heating with a trace of acid works, molasses is acidic) so that it splits into glucose and fructose. The sucrose solution starts out rotating polarised light to the right, but the syrup rotates to the left. It's this "flip" that is called inversion, and it can even be used to follow the process. The colour and flavour come from traces of the molasses left in golden syrup, and from other trace compounds in the other syrups.

Leave a glucose fructose syrup standing and it tends to flip back, forming granules of sucrose

Certainly if you heat set syrup or honey gently in a bain marie or microwave it flips back to runny syrup again, I prefer glass jars of syrup for that reason, so they can be microwaved. I've never had a problem using rejuvenated syrup
Top

Thanks for the advice smitch, but my maple syrup is in the fridge door. I noticed that it needed to kept in there after opening a few hours after I opened the bottle. Luckily our kitchen is quite cold, especially now we've turned off the storage heater that is outside it.
Top
Topic locked
337 posts • Page 17 of 17 • 1 ... 13, 14, 15, 16, 17

Users browsing this forum: No registered users and 2 guests